Will Pest Control Get Rid of Spiders?

Will Pest Control Get Rid of Spiders?

Few pests strike fear into homeowners quite like the eight-legged spider. Maybe it’s the fact that they have eight legs or the creepy way they move, but we get calls all the time from frantic men and women who desperately want their spiders EXECUTED, and fast!
Calling an exterminator for spider extermination is a wise move. Spiders aren’t just creepy. Some of them can be downright dangerous.
It helps to learn more about the spider if you want to eradicate these pests from your home. First, let’s determine what type of spider you have in your house.

The black widow is a spider you want to steer way clear from. The bite of a black widow can cause severe pain and cramping that occurs throughout the body. Young children, the very ill, and the elderly are most likely to have a severe reaction from a black widow’s bite. The spider isn’t very big. It grows to about 3/4ths of an inch in length with an abdomen that measures 3/8th of an inch in diameter. The spider’s abdomen is a glossy black color, but we do occasionally see dark brown and light brown black widows, oddly enough.
Look for a red to orange hourglass marketing on the abdomen but know that this shape isn’t always present. Some specimens of black widows don’t have any brightly colored spots at all.
Homeowners who have been bitten by the black widow will tell you how excruciating the pain can be, and it takes days to subside in many cases. The bites are rarely fatal.
The black widow’s webs resemble scaffolding near the ground level. The spiders construct their webs in protected sites, such as among items that are piled together, beneath boards, or in firewood. Cardboard boxes are another popular nesting site.
When black widows breed, the newly hatched spiderlings climb to the highest points of the area and release a single strand of webbing that “balloons” them to a new location. Many of these tiny spiders do not survive the trip.
When the spiderlings land and do survive, they begin to eat any insects they can capture. When black widows mate, the female sometimes consumes the male immediately afterward, but not always.
You are most at risk of being bitten by a black widow when you rub up against one accidentally. Some examples include slipping a foot into a shoe that spider has crawled into, leading to a spider bite on your big toe. Moving old boxes around is another common way people get bit by the dangerous black widow. 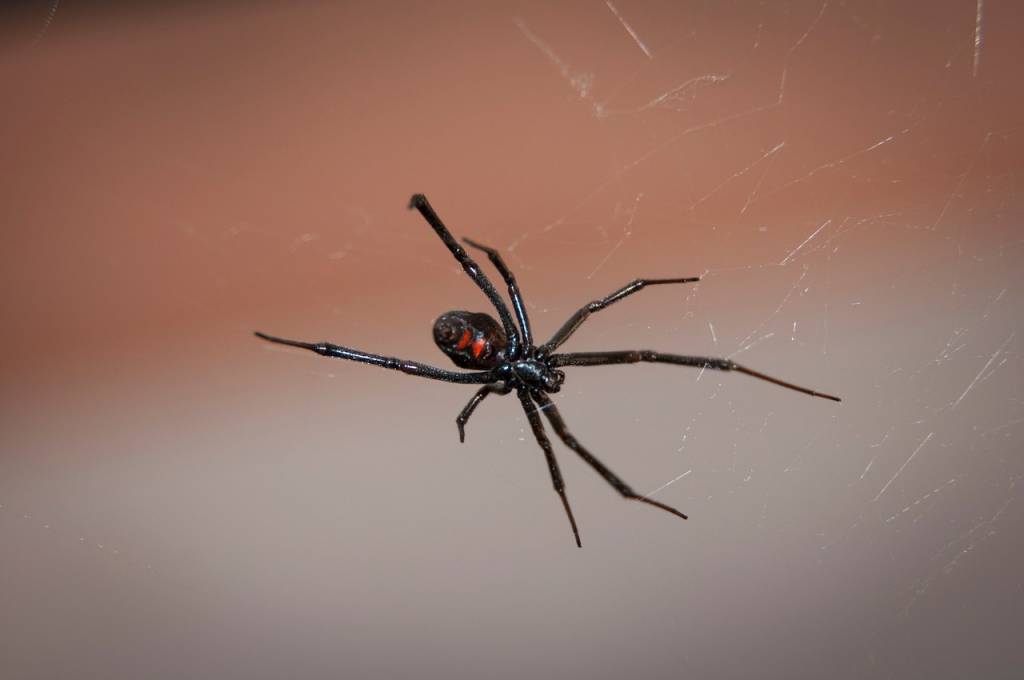 You might want to also look around your toilet seat before sitting down, as many black widow bites have been caused by the spiders building their webs underneath toilet seats only for the person to sit down unaware. Don’t let that happen to you.
You can keep your home free of black widows by clearing the inside and outside of your home of any common hiding spots. Clear away haphazard stacks of firewood, old boxes in the garage and basement, and any other areas a black widow might see is a private nesting area.
You can avoid black widow bites by wearing heavy gloves when moving stacks of wood or dusty old boxes. If you have old pairs of shoes, store them in shoeboxes. When you take the shoes out, shake them vigorously before putting them on.
If you see webbing, inspect it carefully before putting your hand anywhere near it. Black widows are little and can be easily missed until a bite is inevitable.
If you see several black widows, use a vacuum to suck them up. Empty the receptacle immediately outside to keep the spiders from re-invading your home.
Can you keep black widows out for good? If the spiderlings balloon into your home, there’s not much you can do about that. However, you can eliminate nesting areas and vacuum up any spiders you do see, which should be effective for long-term black widow control.

If you see a domestic house spider, you are in no danger. These spiders measure up to an inch in length, but they can be up to two inches in length when you include their legs. Their coloring tends to be brownish-gray with various markings.
The domestic spider is a subspecies of the funnel-web spider, which means that these spiders construct flat webs with funnel-shaped retreats at one end. The females spend most of their lives in their webs, while the males and immature spiders wander in search of females or superior nesting sites.
If you see a domestic house spider in your home, it is usually a male or young spider. The bite is not dangerous to humans, so these spiders are pretty much harmless.
You might see the characteristic funnel webs in holes or cracks inside and outside of your home. Controlling this species of common spider involves clearing out their webs.
To control domestic spiders permanently, our exterminators will apply treatment to any cracks associated with the spider’s web to ensure the spider itself has been killed.
To prevent new domestic house spiders from entering your home, our pest control experts take things a bit further by suggesting you clear any ground-covering vegetation near your home, sealing holes and cracks, and by sealing holes around pipes.
If you see numerous house spiders, the best course of action is to schedule one-time or regular spider control services, so that we can recommend possible treatments for permanent EXECUTION.

If you see a garden spider in your home, try not to jump out of your socks. These spiders can grow up to three inches in length when you count the legs, while their body grows to about an inch in length. 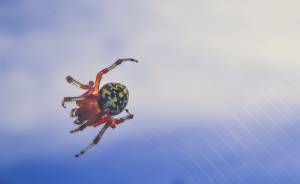 Their coloring can vary, with most garden spiders sporting black and yellow markings. These spiders spin large, orb-shaped webs across open spaces between shrubs and tree branches. The webs are strategically placed along the natural flight paths of flying insects. The spider will sit in the web’s center with its head facing toward the ground, and there the garden spider will wait until it has trapped an unwary insect.
Once an insect is trapped, the garden spider will quickly rush over to subdue its prey. The spider wraps the insect tightly in silk, whereby the insect is then carried away to a more protected area of the web so the spider can eat it later. Once its prey is secured, the garden spider will begin repairing its web immediately to prepare for the next flying insect.
If you see a garden spider, not to worry. These spiders are harmless to humans, despite their large size. You shouldn’t kill them, as they are beneficial arachnids. It would be better to transfer them outside. But we can come to EXECUTE them if you wish.

The common house spider is the culprit if you notice webbing in the corners of your home and garage. Their characteristic webs earned these spiders the nickname “cobweb spider.”
Their bodies grow to about 3/8ths of an inch in length, and they have a spherical abdomen. They are brown or tan in color with various markings.
Like the black widow, these spiders develop young that balloon or float from high spaces to the ground below. Once they find a way inside your home, house spiders will construct webs to catch insects. Flying insects make up most of the house spider’s diet, so you often see their webbing around windows or doorways.
To remove house spiders from your home, remove their webs the moment you notice one. You can also seal up cracks around windows and doors to prevent new spiders from gaining access.
At night, consider switching all exterior lighting to the yellow “bug” lights, which attract fewer flying insects upon which the spiders feed.
Exterminator treatments for the common house spider include applying solutions to common nesting sites, like the corners of your home or garage, which can drastically reduce their numbers for effective spider control.

These spiders can also get pretty big, but they are really nothing to worry about. Wolf spiders are solitary creatures that hunt just as voraciously as their mammal namesakes. Wolf spiders come in a range of sizes, with some growing as large as one and a half inches in length.
The largest of the species can have a leg span of three inches or more, leading many homeowners to mistake them for tarantulas.
Their bodies are brown or black, and their abdomens are quite hairy.
Wolf spiders are active hunters and will roam anytime, night or day in search of prey. The spiders are common and may live in significant numbers around your home. Some may get inside through cracks around doors and windows and through defects in the exterior walls.
Unlike other spiders that lay egg sacs that remain in the web until the young hatch, wolf spiders lay eggs in sacs that they carry along their abdomen. After hatching, the young will ride on the mother’s back for a few days before roaming off on their own. This is why, if you see a wolf spider with a bunch of swarming things on its back, you are probably looking at mama giving her babies a ride. If you hit the mother with a broom, the babies on her back can scatter, sending all those young running for every corner of your home. If you see a mother carrying young, call our professional exterminators immediately so that you don’t end up with a big wolf spider problem later on.
If you are bitten by a wolf spider, it is usually because it was handled or disturbed. They are nature’s exterminators and can clear your house of bugs, but their significant size can be disturbing. They are not dangerous, however.
We typically find wolf spider nests under stones and within cracks between landscape timbers. The good news is that the spiders do not breed in homes. If they come inside, it’s usually to hunt for insects.
The best way to control wolf spiders is to place sticky traps behind major appliances and near the floorboards. This is ideal if you see multiple wolf spiders, and you suspect many more are nearby.
To keep new wolf spiders out, remove any heavy ground cover, especially any grass or vegetation that may be touching your home outside. Seal up any cracks or holes around your home and install tight-fitting screens on all the attic and foundation vents.
If you suspect you have a severe invasion of wolf spiders, our experienced pest control experts have targeted treatments that can get rid of your spider problem for good.

What Can You Expect with Our Professional Spider Control Services?

You now know more about spiders and how to identify the type of spider you’re dealing with. You also have some ideas on how to get rid of the occasional spider you might see in your kitchen or bedroom. Don’t forget to patch up any holes to keep new spiders out.
But above all, we have answered the question: Will pest control get rid of spiders. The answer is a resounding Yes!
If you require professional spider control, call Activated Pest Solutions. We proudly service the areas throughout Menifee, California, and the surrounding areas. We can arrive at your home to provide you with a free estimate.
For total-property spider control, we will start with a perimeter treatment of your home to EXECUTE spiders where they nest. We will treat around your landscaped areas to ensure nearby spiders don’t enter your home and treat any areas inside your home where there are signs of webbing and nesting.
We offer one-time and regular pest control and guarantee we can keep your home spider-free for the long term.
Call now for a free estimate and tell us about your spider problem.